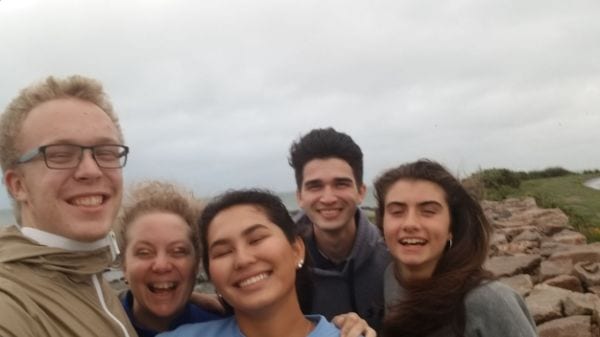 The house has gone from noisy to quiet. Perhaps it’s more correct to say it’s changed from “too noisy” to “too quiet”.

The winter break seemed longer this year, but not because of the high school. It was the college freshman who came home on December 18th, and didn’t go back until January 23rd.

When he left, back in late August, we experienced a revolving door effect that left us parents a bit dizzy. In the morning, we took our son of 18 years down to a new life for him. By late evening, we returned to a home with two responsibilities, completely new to us. One was from Spain and one was from Brazil. It was a lot to face in one day, one huge good-bye and two fresh hellos.

We’re a family that has a lot of people in and out of our home. We made this decision consciously, and it is a pretty common one amongst other parents, too. We all want to know our children’s friends, and so we try to say yes to the overnights and hosting.

Bringing home college freshman also means seeing his girlfriend quite a bit. High school friends of his also stop by, occasionally sleeping over. Then there are the junior son’s gang of friends, which seems to always run with at least four of them, sometimes up towards ten. They rotate houses a bit, and each day without school means they are together somewhere. The senior son floats in and out of each of these groups.

The sophomore daughter’s social group brings a new dynamic to the mix. Until New Year’s Eve night We didn’t know that one bedroom could sleep nine teenage girls. The seventh grader’s friends are in and out, too, sometimes mixing in with the sophomore crowd.

After nearly two solid weeks of this, it’s almost a relief to have them all return to school. But since college classes start so much later, it’s not a complete change. The senior girlfriend has flexibility in her schedule, and so there are still family game nights, sometimes with too many people to all play together even.

We are also on a countdown. The senior Brazilian exchange student son, who was going to stay “just one month”, has been with us now for a full half of his year. He’s now ready to go to the family that accepted him in September–but had construction delays and couldn’t take him until towards the end of January.

Eventually, the calendar rolls around, and it is his time to leave. We know we’ll see him again, frequently even, with snowboarding and some planned trips already set. But there is a marked hole the next morning when he is not in the kitchen, faithfully unloading the dishwasher. There is another empty space when he is not at the family supper table, or settling into bed at the end of the day.

Then two days later, college calls and the freshman is back to classes. Suddenly he is not here, either, nor is his girlfriend… and we are down to only three in our house again, instead of five “for sure”, but usually six, and often eight or ten…
Quiet is good sometimes.

And noisy is, too.