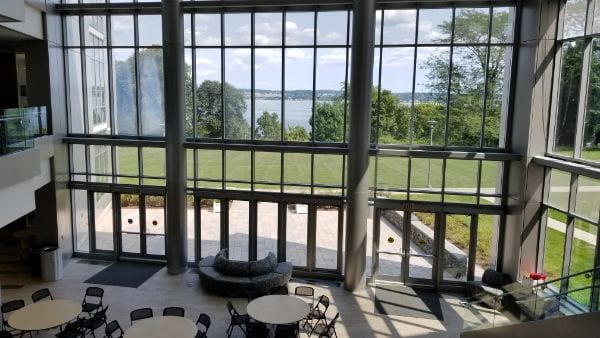 I feel like I’ve been put into some sort of a time machine.

It’s Thursday morning. In the past 10 days, we’ve celebrated the end normal season lacrosse for all three of our kids. Hosted and played tourist with five out-of-town relatives. Said good-bye to the elementary school, the home-away-from-home for at least one child for the past 14 years. Watched a high school graduation of young adults, whom, in a lot of cases, we’ve known literally since birth. Planned, organized and threw an outdoor graduation party for seven young men.

It’s less than a week later, on Thursday morning at 5.30 AM. We are all piling into the car, bags packed and stowed. It will be nearly a three-hour drive.

It’s “Student and Family Orientation” for the recent high school graduate, the class of 2017.

Well, let me rethink and rephrase that. Last week, he was the high school graduate. Six days later, he is “the incoming freshman” or, as they put it, “the incoming class of 2021″.

We arrive on campus, and oh-so-friendly and upbeat upper classmen meet us in the parking lot, advising our son to take his overnight gear with him so that it can be put away already. We walk together, and are immediately met with signs. “Students” are sent to the left, and “Family” is sent to the right. “Is this it?” I joke with the person taking our information. “We won’t see our son again the rest of the time?”

She smiles softly and assures me that we could sit together at the first session, if we want. After that, though, she says carefully, “He’ll be doing his own program. You’ll have your own.”

I can’t help to compare this back to the age of the dinosaurs, when I was in college. I don’t recall having anything like this. I remember being sent a course catalog in the mail. It was printed on extremely light-weight paper, in a very small font. I was captivated by all the choices, all the courses I could take, the variety.

I also remember going down to the campus in August, and moving in. I remember saying goodbye to my parents, who were almost surely rather emotional, probably my dad more than my mom (although he would have hidden it well). And then they left, and I was off to explore.

I pull out my cell phone and send a text to two of my former college roommates, who also have two of their kids heading off to college this fall. (For both of them, however, it’s their second child. I love knowing that they are more experienced at all this than I am. They have always been great sounding boards.)

“Hey,” I text. “Did we have an orientation? Did I forget this??” Their answers are quick–and their memories are the same as mine. Definitely no. This is a new thing, they tell me, this student orientation. But they agree: it’s a good “new thing”.

Our family settles into the rythym of the day, which consists mainly of lots of break out sessions in various sizes of groups. We can hear about campus life, technology needs, study abroad, college athletics. We can take a tour of the area, of the dorm rooms, of the campus itself.

I quickly realize that we’ve probably made at least a small mistake in bringing “the family” to “family and student orientation”. Although there are others who have brought along siblings, we are in the minority. Cell phones keep the younger two entertained during longer sessions, but eventually I feel I must let them both escape. I leave my husband to listen to the next presentation, and the three of us head for the oceanfront.

I am struck by the thought that this little family unit will soon not be so strange to me, that the absence of the oldest one will be something that I will have to accept, and embrace as a “new normal”. I decide that even if a lot of families had only brought their college freshman and themselves, it was OK that we had forced the now high school junior and newly minted middle schooler to come, too. It’s time for the junior to start taking the idea of college more seriously. And it’s not too early for the 7th grader to broaden her thoughts either.

The junior surprises me with some commentary on the campus. He notes what he likes, what he thinks could be different. He even mumbles a bit about what he might like for himself, and what he sees as possibilities of a course of study. The 7th grader compares her visit to Keene State College, which all the students at her elementary school did, and starts to see herself doing this sort of thing one day, too.

Then we arrive at the water’s edge, a distinct and wonderful benefit this college has with its lovely location at the shore. I stare out at the bay, watching the water ebb and flow. The two kids are behind me, a brother and sister clambering together over the rocks, skipping stones. Suddenly, it’s game on. My daughter is squealing, and her brother is chasing her around with some sort of dead sea creature.

Nothing has changed. But then again, everything is about to.

is a look at family life, through the lens of education.  Sometimes it’s actual classroom learning… maybe it’s sports… or perhaps it’s the parents receiving the life lesson (yet again!).  Well loved and published in the local paper, the Brattleboro Reformer.