A Bamboo Flute Travels to Brattleboro 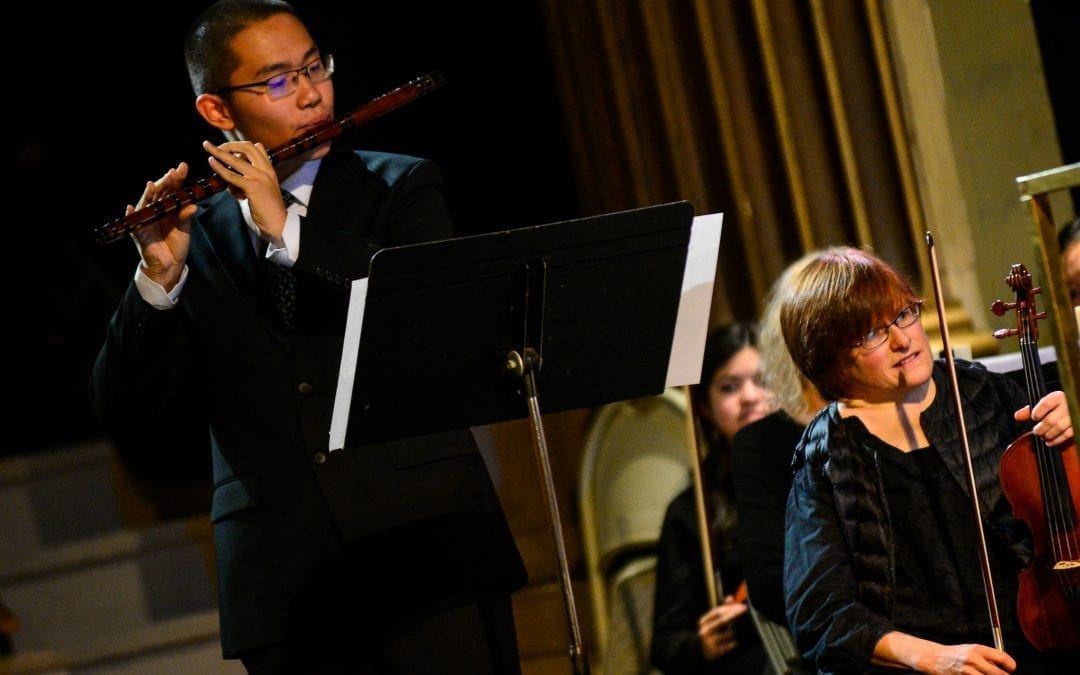 The orchestra conductor stands in front, his very presence at once intimidating and calming.

The student is slightly to his side, deferential and yet ready to jump in and lead with his solo. He knows only one person in the room besides the conductor: his American high school band director. Although he later claims to be “very, very nervous,” he doesn’t show it. Instead, he bows slightly to the orchestra players as he is introduced.

Both the young musician and the leader are excited. Still, they look slightly worried–but yet hopeful. All sorts of emotions seem wrapped together in a jumble of professionalism and positive energy.

The orchestra players are seated with their instruments at the ready. They are respectful–and fascinated with having this young man who hails all the way from China. The student holds his instrument with care and passion. As he is asked, he politely explains how his bamboo flute works, showing finger holes and positionings in general, telling them all what his instrument is called in its native land. He teaches them, slowly, the pronunciation for “flute” in Chinese. They echo it back to him.

“Good pronunciation,” he smiles. They laugh. The tension in the room starts to decrease; the enthusiasm grows even more.

The conductor–who speaks with a lovely English accent even after many years in Vermont–explains the situation to his musicians. He has listened to two pieces that the bamboo flute soloist will play with them. The music, he tells them, is not written in the “western style” we are all accustomed to seeing. It is written in Chinese annotations, which we here do not know how to read.

“I’m really out of my league on this one here, guys,” he admits. “But I’ve done my best to write an accompaniment for all of us that will match what he will play.”

He smiles over at the student. “So, now, we will see what I’ve done.” He pauses for just a second and turns again from his orchestra to the soloist. “Anything that goes wrong is completely my fault, right?” he clarifies. “We will see what works… what does not go OK… and where, I hope, to fix it.”

He instructs everyone where to begin, and notes that one of the pieces will have only limited accompaniment from the orchestra. They all set their papers on their stands and lift their instruments up. “Right then,” he says. “Let’s start on my downbeat, in four.”

In a rush of air and fingerings, the room goes from silent respect to a tentative chord, supporting the flute as it sings out. They play for about a minute or two, stopping to check on a timing. “Here, you see?” the director calls out. “Right here, at this measure, when he is on the trill, take out four beats. I’ve made a mistake, I think. Just take out those four beats and then we will all be back together.”

He pauses to mark his own music, and then raises his hands and baton up in the air. “Yes, now, start again,” he says and gives another down beat to bring them in.

The sounds reverberate around the auditorium. It is compelling, even in its first read-through with the occasional abrupt stop. It swing up, swoons down, drives forward, holds back and promises more.

It is, in a word, extraordinary.

They finish the first time through, and they break into spontaneous applause. The student exhales, finally allowing some of his nerves to show through. But it is obvious: he is pleased, very pleased, with how it has just sounded.

The room is jubilant, but silent. The music has produced profound emotion is all of us who have listened. A few quietly wipe away a tear or two. All are quiet and still. They seem lost in what they have just done together.

The director finally finds his voice. He turns to the young foreign exchange student who has traveled 7,000 miles to be a part of this small town’s community.

“This will be wonderful,” he asserts.

“This concert, “Music in Our Schools”, is always well received, and I really look forward to doing it. But this… this will be even more spectacular. The children will just love hearing this, and seeing you,” he says as he looks at the Chinese exchange student at his side. “The adults, too, at the lunch time concert, will be blown away,” he predicts.

“This is such a gift you are giving to us all,” he pauses.

He turns fully to the young man with his bamboo flute. “Thank you. Thank you for sharing this with us,” he finishes, simply and sincerely. “It is a gift.” The student bows slightly to another round of applause from the orchestra.

A Chinese bamboo flute, unknown to these musicians before this first rehearsal… a determined English director who goes out on a limb and writes music to match what he hears … and a group of American orchestra professionals dedicated to producing the best they can.

They have come together to produce something none of them knew could happen.

And our community is much the richer for it.